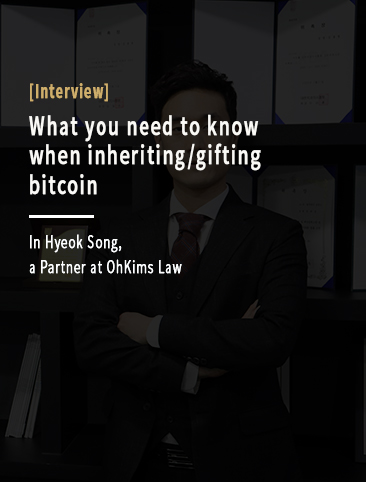 · Bitcoin donation, similar to other asset donation procedures
Inheritance-related services should be prepared at domestic exchanges...

· Overseas exchanges are exceptions Gift can save more tax than inheritance

Starting next year, if you decide to inherit cryptocurrency such as bitcoin to your child, you will have to pay inheritance/gift tax. According to the amendment to the Enforcement Decree of the 2020 Tax Act’, announced by the Ministry of Strategy and Finance on the 6th, taxes are to be levied from inheritance and gifts after January 1, 2022. Then, how is the value of the cryptocurrency assessed when paying the inheritance/gift tax? Which option is more advantageous in terms of tax savings? As the number of people who want to inherit or gift cryptocurrency increases, the curiosity about the newly implemented tax reform plan is also growing.

We met with Mr. Song, a partner attorney at OhKims, and asked questions about the tax reform plan related to the inheritance and gift of cryptocurrency. Attorney Song is an expert in this field, currently registered as an inheritance attorney at the Korean Bar Association. The following is a reorganization of the conversation with Mr.Song in a simple Q&A form.

Q. I bought 1 bitcoin this year for 40 million won. If the price of bitcoin has risen to 100 million won at the time of gifting to my child, what is the standard for charging the gift tax?

There are two ways to evaluate cryptocurrency. First, assets traded by operators (exchanges) notified by the head of the National Tax Service are calculated by averaging daily average prices for one month before and after the exchange's evaluation base date. Second, for all other cryptocurrencies, it is calculated as the average daily price on the evaluation date, or the market price announced at the end of the day.

Q. How do I inherit and/or gift Bitcoin?

The gift process of bitcoin is not very different from the process of donating other assets such as real estate. All you have to do is complete the transfer form, give(donate) the bitcoins to your child, and not get paid.

The problem is inheritance. If there is bitcoin in the wallet of a large cryptocurrency exchange, the exchange must make sure that the person who came to inherit is the actual heir. This is because you cannot inherit Bitcoin from someone who is not an heir. In the case of a bank, when the account holder dies, the heirs submit the inheritance documents to the bank. The bank will review the documents and make a transfer or withdrawal.

With this revised tax law, it is most likely that large exchanges will be preparing the necessary procedures and documents for inheritances just like banks. It is also expected that they are also considering ways to exempt themselves in case of a mishap.

However, it is very likely that foreign exchanges are not yet preparing such services. For this reason, it seems that there will be difficulties in law enforcement when using foreign exchanges. However, the problem that occurs when Koreans inherit assets overseas does not only occur with inheriting cryptocurrencies such as Bitcoin.

Q. If I sell 100 million won worth of bitcoin to my child for 10 million won, wouldn't I have to pay the gift tax?

Q. What method do you recommend for saving tax between inheritance and gifts?

Gifts are recommended. Inheritance requires you to pay an inheritance tax as you inherit an asset, but there are a number of ways in which you can save on tax when gifting. If we go back to the previous example on selling 100 million won worth of bitcoins to their children for 10 million won. This means that they’ve sold 60 million won cheaper than the 70 million won deduction limit. (70%)

It is within the basic deduction limit for parents to gift/donate their children within the limit of 50 million, per decade. If you don’t make other donations on other assets, you can deduct 50 million won from 60 million won and pay gift tax on the remaining 10 million won.

Q. How do I prepare for a dispute over a claim for return of the reserve?

The reserve is a certain portion of the inherited property reserved under the law for a certain heir. The heir can freely dispose of his or her property, but it is not advisable to dispose of all of the property to another person without considering the livelihood of a spouse or child or other close relatives (heir) right before death. For this reason, is the purpose of reserving is to leave a certain percentage of property for close relatives.

For example, person A has children B and C. A has gifted 200 million won worth of bitcoin to B in his lifetime. B sold it when the price of bitcoin rose to about 400 million won. Five years later, A dies, and the remaining child C requests return of his portion. At this time, B’s total value of bitcoin is 800 million won.

/Reported by Yeri Do yeri.do@